A lot of people especially young adults believe that the Earth is Flat!

Google Trends showing Interest in Flat Earth peaked during 2017, but its still undeniable that a lot of people still believe that the Earth is flat.

Walking on Earth’s surface, looks and feels flat, so they deny all evidence to the contrary, such as satellite photos of Earth as a sphere to be false / photoshopped and created by big government organisations.

There are several flat earth theories and some which even say Earth is doughnut! But the most famous one is following:

The leading flat-earther theory holds that Earth is a disc with the Arctic Circle in the center and Antarctica, a 150-foot-tall wall of ice, around the rim. NASA employees, they say, guard this ice wall to prevent people from climbing over and falling off the disc.

Along with that, there are several old mythological and religious theories that people believed it in the 15th century when we were not this advanced of a civilization.

Earth’s days and nights cycle is explained by 2 spheres (Sun and Moon) measuring ~50 kilometers moving in circles ~4830 km above the plane of the Earth. According to them Stars move in a plane that is ~5000km above the Earth. Like streetlights these celestial bodies illuminate different parts of the Earth at different times. They also agree upon some anti-moon like disc which cause phases of the moon and even lunar eclipses. 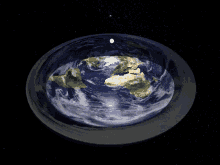 Some theories also include presence of 2 or more sun and moon being some supernatural entities which emit light according to the region.

Moving ahead, some think that the Earth’s gravity is just an illusion and instead of objects accelerating downwards, the Earth’s disc is moving upwards at ~9.8 m/s^2. powered by * dark energy *. Although, most believe there is no gravity and objects just fall!!?? This if you are rational is super weird as it conflicts with general relativity and relative positions of other celestial bodies too. As of what is beneath the surface, some say a very thick layer of rock, unbreakable whereas some say “hell” is below us (like it is also believed in sphere earth theory).

It was very difficult for me to understand how seasons occur when the Earth is flat, but some quick DuckDuckGo-ing helped me find out. (Google somehow doesn’t let those results come up – or is just probably “personalizing” my results for my rational-like brain)

The four seasons and weather on a flat earth can be easily explained and understood, and it perfectly explains what we actually see and experience. The sun is close and small and circles around and above the flat earth in a spiral pattern on the Tropic of Cancer in the Northern Summer months, and then down to the Tropic of Capricorn in the Northern Winter Months. So when the sun is further away from the North Pole, it’s winter in the north and summer in the south.

From believing that GPS machines are “rigged” and Space Internet and weather satellites move in circles above Earth; they believe that the motive of government agencies spreading “Earth is Sphere” propaganda is rather Economic. Taking real trips to Moon and other planets would be extremely expensive and also scientifically a big undertaking. Hence, it would logically cost much less to fake a space program than to actually have one, says flat-earther website’s FAQ .

Who are these Flat Earthers?

From popular movie stars to young millennials – easily influenced by random YouTube video, there is a huge amount of people who believe the Earth is Flat.

One of the reasons people believe is the traction the movement has received. They have a very legit and seemingly convincing website with a very active forum. There are a lot of youtubers who try to prove that the Earth is Flat with obvious false methods or even as a joke. But there is a part of the society (a small part who is very influential) who will find a small evidence and put together a theory that is just opposite to what is taught in school.

Not only does this part of society just comprise of young out-of-the-box thinkers but also a lot of middle aged people and famous influencers especially those from the west.

Even with several counter-proofs and obvious facts on why these theories are false, people still exist in the wild who in 2021 believe the Earth is flat. These beliefs shows us a part of the society, we do not often think about.

Censorship is bad for free thinkers

A major subset of the flat earth believers probably know science better than us but have convinced themselves with their thinking that the Earth is flat. These are the same type of people who made society think otherwise in the 16th century when the church used to force people to believe the Earth to be flat. I am not telling that their theories are even remotely true, but during the time when most people are becoming robots thanks to our education system, we need such free thinkers; people who would like to do something opposite the society’s normal thinking. These are the people who might find answers to a lot of astronomical problems.

Censorship of ideas hampers progress. YouTube has been vocal about it and it actually does censor videos proving flat earth. These videos are not to be found by searching. Censorship fuels conspiracy narratives. Conspiracy theorists, once censored, can add to their arguments that they must have “them” frightened of “the truth” because “they” are now stooping to censorship to stamp out those who speak truth to power.

And it is good that people are being vocal about it and exploring the truth themselves rather than just beleiving what is spoonfed to them when they are in grade 3.

The education system has failed us

The “logical” explanations that the flat earthers come up with are so absurd, that we feel like has the system not taught science and how things work. And the answer is probably yes. As a society seeking education, we are not taught how to think and how things work, but rather flooded with facts we are expected to memorize. If education involved exploration and learning by discovering, then the people who believed in such conspiracy theories, be it of Flat Earth, 5G, COVID-19 vaccine, would be way less. And that is what we need to think about. Instead of teaching young minds, why not let them naturally explore with guidance from the “teachers”.

Thanks to my friend for asking me to write on the topic.

Thanks to Aryan for helping me edit the post after ghosting me for hours.
#thoughts

If you found any typo, wanna reach out or have a chat – Discord: Vim#9499 email me at hi@vimarsh.info